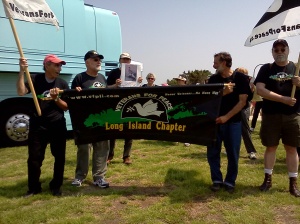 Note: This was initially posted in May 2012.  It is still extremely relevant now, in May 2014.  Memorial Day airshows, glorifying war, are now being conducted in several locales around the country.  Anti-war demonstrations are held at many of these.  This article describes the 2012 Jones Beach airshow and the demonstration that was held there by dozens of Long Island peace activists.  Please also check out the four-minute video, below.  It provides a very good sense of both the airshow (bizarre) and the demonstration (inspiring).

Bombers flew over the Atlantic, as we watched from the shore.  Jet fighters dove through the sky above us.  The veteran standing beside me trembled, as the ear-piercing sound of the planes overhead evoked an agonizing memory of war.

The vet was a member of the Long Island Chapter of Veterans for Peace.  He and I were among the sixty peace activists who attended Saturday’s Memorial Day Air Show at Jones Beach.  Our gathering was organized by Pax Christi Long Island.  Members of numerous Long Island peace and justice organizations participated, including Code Pink LI, North Country Peace Group, South Country Peace Group, LI Alliance for Peaceful Alternatives, and the Suffolk Peace Network.

Our purpose in gathering at the beach this Saturday was to reaffirm the true reason that we observe Memorial Day.  Memorial Day is a day where we pause, to mourn the loss of those who died in war.  It is a day to recommit ourselves to ending ongoing wars and to preventing further wars.  Memorial Day is not a day for celebrating the weapons of war.  The Jones Beach Air Show glorifies war and trivializes violence.

The bomber planes swooped over the ocean, opened their bomb bay doors, and dropped watermelons into the water.  Thousands on the beach cheered.  We stood solemnly, holding photos of the dozens of Long Islanders who were killed in Iraq and Afghanistan.  We read their names.  We mourned their loss.  We stood before thousands of pink ribbons, each with the name of an American who was killed in Iraq or Afghanistan.  We vowed to continue our efforts to work for a more peaceful world.  We expressed our deeply held belief that flights of fighter planes and bombers should not be presented as entertainment.

Recruiting at the Air Show

As we peacefully marched along the boardwalk, we came upon a number of military recruiting stations, as required by the Air Show’s contract with the Department of Defense.  One member of our group called it “sad,” another, “shameful and offensive,” that young people were being recruited on this day that is dedicated to mourning the deaths of members of our military.

As we walked along, we distributed 4,800 flyers to families attending the Air Show.  We engaged in dozens of meaningful conversations with our Long Island neighbors.  Passersby repeatedly thanked us for our presence and our message.  This was certainly enheartening, but should not have been surprising.  The Associated Press reported last week that only 27% of Americans support the war in Afghanistan, while 66% are opposed to the war.

Ribbons with Names of the Dead

The Center for Strategic and Budgetary Assessments reports that an analysis of the Department of Defense Budget indicates that it costs us $1,200,000 to keep each soldier in Afghanistan for one year.  U.S. Labor Against the War has calculated that this is enough to fund twenty-three good, union jobs per year, here at home, for each soldier we bring home.  We currently have 100,000 troops in Afghanistan.

President Eisenhower cautioned us to be wary of the “military-industrial complex” and its influence on our foreign policy.  (Article and video here) The U.S. military weapons industry makes billions of dollars annually.  Former Secretary of Labor Robert Reich recently pointed out, “It’s almost impossible to terminate large defense contracts. Defense contractors have cultivated sponsors on Capitol Hill and located their plants and facilities in politically important congressional districts.”  As Reich and others have noted, the United States spends more on its military than do China, Russia, Britain, France, Japan, and Germany; combined!

This month, following Memorial Day, we can honor our servicemen and women by calling for an end to the war in Afghanistan.  It takes just three minutes for each of us to call the Congressional switchboard at (202) 224-2131, and to leave a simple message for our member of Congress, urging a speedy end to the war.

(Note: I wrote this article following the 2012 Jones Beach Memorial Day Air Show.  An excerpt of this article recently appeared in a Long Island newspaper.  The full article is presented above.  Below is a powerful four-minute video of the 2010 Air Show and of that year’s demonstration.)