Posted on December 26, 2010 by Activist Resources

A recent edition of United for Peace and Justice’s  “Afghanistan War Weekly” notes that President Obama has “reaffirmed his commitment to ‘win’ the war.”  The report also points out that much of President Obama’s recent speech, as well as the Executive Summary of the administration’s annual report, discusses Pakistan’s critical role in the war.  The Weekly indicates that President Obama did not comment on the “war’s many and obvious  failures.”  The full text of this edition of the Weekly can be found here.

This edition is one of a series of reports that can provide helpful information and analysis regarding the War in Afghanistan. Links to archived editions of the Afghanistan War Weekly can be found here.

In the interview, Hoh states, “The administration wanted to stay for political reasons, to win what they call ‘the right war’ and do it closer to the 2012 elections.”  Hoh also noted, END_OF_DOCUMENT_TOKEN_TO_BE_REPLACED

Posted on December 22, 2010 by Activist Resources

The Senate has finally ratified the New START Treaty.  This will make the world a little bit safer.  It will move us just a little bit further along, toward the ultimate goal of nuclear abolition.  The treaty will significantly reduce the number of strategic nuclear warheads (to 1,550) and launchers (to 700) that the United States and Russia can deploy.  Importantly, it will establish a new inspection and monitoring regime, replacing the program that had lapsed in 2009.

Unfortunately, in large part to gain support for ratification, President Obama has agreed to spend more than 84 billion dollars, over the next ten years, to “modernize” our nuclear arsenal.  I have to wonder to what extent this substantial commitment was encouraged by the corporate interests that will benefit from this huge expenditure.  I am reminded of the prophetic words of President Eisenhower, END_OF_DOCUMENT_TOKEN_TO_BE_REPLACED

Did Paul Krugman Predict the Extension of the Bush Tax Cuts, 10 years Ago?

Posted on December 19, 2010 by Activist Resources

Nobel Prize winning economist, Paul Krugman, in his May 30, 2001 column for the New York Times, wrote (my emphases), “I delved further into the absurd piece of tax legislation that a House-Senate conference devised and that George W. Bush triumphantly signed last weekend. The Bush tax plan was always peculiar: in order to hide the true budget impact, its authors delayed many of the biggest tax cuts until late into the 10-year planning period; repeal of the estate tax, in particular, was put off to 2010.”

Krugman continued, “But even that left the books insufficiently cooked, so last week END_OF_DOCUMENT_TOKEN_TO_BE_REPLACED

Posted on December 16, 2010 by Activist Resources

Veterans for Peace (VFP) and hundreds of supporters rallied on December 16 at the White House, calling for President Obama to “Stop these wars!”  Veterans for Peace has reported that 131 demonstrators were arrested.  VFP noted that the arrested included five VFP board members, Daniel Ellsberg (Pentagon Papers), Chris Hedges (journalist), END_OF_DOCUMENT_TOKEN_TO_BE_REPLACED

Posted on December 13, 2010 by Activist Resources

Cheryl Wertz, the former Executive Director of Peace Action New York State (PANYS), was recently presented with the Kairos Award by the Long Island Alliance for Peaceful Alternatives.  Cheryl was honored for “her leadership and creative peace work with PANYS.”  She is currently a member of the PANYS board and is also active with Brooklyn for Peace.

Posted on December 10, 2010 by Activist Resources

War Resisters League (WRL) board member Frida Berrigan was recently presented with the Kairos Award, honoring her for “her commitment to nonviolent action and her work for nuclear disarmament, demilitarization and human rights.”  The Long Island Alliance for Peaceful Alternatives presents this award annually to individuals and organizations in recognition of “their work to create conditions of peace and justice and moments of possibility for social change.”

Frida is nationally recognized as an expert on national security issues, the arms trade, human rights, and nuclear weapons policy.  She was a Senior Program Associate of the Arms and Security Initiative at the New America Foundation.  She served as the Deputy Director and Senior Research Associate at the Arms Trade Resource Center of the World Policy Institute.

In her acceptance speech, Frida described, “the work of peacemaking” as, END_OF_DOCUMENT_TOKEN_TO_BE_REPLACED

Posted on December 6, 2010 by Activist Resources 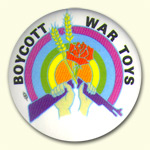 The shopping season is in full swing.  The War Resisters League (WRL) has issued a call, urging us not to buy war toys.  WRL points out, “Playing with war toys and violent videos numbs people to the terrible truth: War means death and suffering, not fun and games.”

Posted on November 29, 2010 by Activist Resources

The American Friends Service Committee has recently issued a “Report Card on Performance and Progress for the U.S. War in Afghanistan.”  As with all report cards, to be meaningful, this report card must offer comments that provide details of how things are going.  It must offer practical suggestions for improvement, when improvement is necessary.  The AFSC report card does an excellent job, in my opinion, of providing important details and of offering sensible, practical recommendations for improvement.

For example, here is one of the details that the report card indicates.  “US military continues END_OF_DOCUMENT_TOKEN_TO_BE_REPLACED

Honduras: The Reforms, the Coup, and the Aftermath- Speech by Nectali Rodezno Izaguirre

Posted on November 26, 2010 by Activist Resources

Nectali Rodezno Izaguirre is the Coordinator of the Honduran National Lawyers’ Front Against the Coup.  As a human rights lawyer and nonviolent activist, Nectali recruits lawyers from across Honduras, helping them to provide pro bono representation to those who have been illegally detained, charged, or tortured by Honduras’ de facto government.

Witness for Peace has coordinated a series of speaking engagements, where Nectali addresses audiences in a number of U.S. cities.  In a recent speech, Nectali spoke of the events leading up to the coup, the overthrow of the democratically elected government, and END_OF_DOCUMENT_TOKEN_TO_BE_REPLACED

Thousands Demonstrate at Fort Benning; Call for Closing School of the Americas; 26 Arrested

Posted on November 22, 2010 by Activist Resources

Thousands of peace and justice activists demonstrated this week at the School of the Americas (SOA) at Fort Benning, Georgia.  The School of the Americas Watch (SOA Watch) demands that the SOA be closed, asserting that, “evidence of atrocious human rights abuses that have been committed against the people of Latin America have come back to point to those trained at the SOA.  This evidence abounds.”

Twenty-six people were arrested, including END_OF_DOCUMENT_TOKEN_TO_BE_REPLACED