On Sunday, April 26, we will gather together, calling for a nuclear-free, peaceful, just, and sustainable world.  “Nuclear abolition connects deeply with struggles to end and prevent wars, increase peace, and achieve economic and environmental justice…”  Join us on Sunday in New York City, or participate in any of the many local marches and rallies, taking place throughout the United States and around the world.

Additionally, on April 24 and 25, there will be a Peace and Planet conference in NYC.

For further info on Sunday’s mobilization, or on the conference, check out http://www.PeaceAndPlanet.org

Nonviolence, Peace, and War- In the Words and Voices of Martin Luther King, Dave Dellinger, Dorothy Day, and Others

Posted on January 16, 2015 by Activist Resources

Eighty-six years old, this month (January 2015).  That is how old Martin Luther King, Jr. would be, if he were still here with us today.  I’m sure that his words and deeds would still be inspiring us, today.  Dr. King understood the power of words.  He employed his wonderful eloquence to teach the importance of peace and nonviolence.  He knew that we must act upon our beliefs, and he helped our nation to become more peaceful and more just.

The photo, above, is of King delivering his magnificent “I Have a Dream” speech, in 1963.  You may have noticed that the second photo in the Peace and Justice Online masthead is of the same rally.  Today, however, I am quoting from King’s important (and often overlooked) 1967 speech, “Beyond Vietnam- A Time to Break Silence.” In this speech, speaking of excessive military spending, Dr. King tells us, “Somehow, this madness must cease.” Listen here:

Later in this post, there is a link to the full text of this speech.  There is also a slideshow with audio excerpts from the speech.

Another nonviolent activist, David Dellinger, was one of my heroes.  I first heard him speak, around the time of the Chicago Seven trial.  I was inspired by his essays in his book, Revolutionary Nonviolence.  We were privileged to have had him join us, demonstrating to shut down END_OF_DOCUMENT_TOKEN_TO_BE_REPLACED

Note: This was initially posted in May 2012.  It is still extremely relevant now, in May 2014.  Memorial Day airshows, glorifying war, are now being conducted in several locales around the country.  Anti-war demonstrations are held at many of these.  This article describes the 2012 Jones Beach airshow and the demonstration that was held there by dozens of Long Island peace activists.  Please also check out the four-minute video, below.  It provides a very good sense of both the airshow (bizarre) and the demonstration (inspiring).

Bombers flew over the Atlantic, as we watched from the shore.  Jet fighters dove through the sky above us.  The veteran standing beside me trembled, as the ear-piercing sound of the planes overhead evoked an agonizing memory of war.

The vet was a member of the Long Island Chapter of Veterans for Peace.  He and I were among the sixty peace activists who attended Saturday’s Memorial Day Air Show at Jones Beach.  Our gathering was organized by Pax Christi Long Island.  Members of numerous Long Island peace and justice organizations participated, including Code Pink LI, North Country Peace Group, South Country Peace Group, LI Alliance for Peaceful Alternatives, and the Suffolk Peace Network.

Our purpose in gathering at the beach this Saturday was to reaffirm the true reason that we observe Memorial Day.  Memorial Day is a day where we pause, to mourn the loss of those who died in war.  It is a day to recommit ourselves to ending ongoing wars and to preventing further wars.  Memorial Day is not a day for celebrating the weapons of war.  The Jones Beach Air Show glorifies war and trivializes violence.

The bomber planes swooped over the ocean, opened their bomb bay doors, and dropped watermelons into the water.  Thousands on the beach cheered.  We stood solemnly, holding photos of the dozens of Long Islanders who were killed in Iraq and Afghanistan.  We read their names.  We mourned their loss.  We stood before thousands of pink ribbons, each with the name of an American who was killed in Iraq or Afghanistan.  We vowed END_OF_DOCUMENT_TOKEN_TO_BE_REPLACED

Posted on November 27, 2013 by Activist Resources

Update- 2013–   It’s that time again!  We are once again bombarded with holiday shopping advertisements.  Here on Long Island, we are once again demonstrating in support of Walmart workers who are protesting and/or striking for reasonable wages and working conditions.  We are also, once again, operating our Black Friday free store, offering food, clothing, and other items at “100% off, for the 99%.”

Update- November 2012-  Black Friday is approaching.  Members of Long Island’s peace and justice organizations will be demonstrating at a local mall, as we do each year at that time.  This year, we will, along with local Occupy groups, hold our demonstration outside of Walmart, as we support the Walmart workers’ Black Friday strike.  We are calling for an end to corporate greed and for a national policy that promotes jobs and not war.

(Update- December 2011: This post from 2010 is still relevant, of course.  Reverend Billy has offered us this message, as he travels this 2011 holiday season, to join Occupy Chicago. “Riding the train 500 miles, I appreciate how vast this country is. Occupying this whole thing is a daunting task. Let’s take our Occupy END_OF_DOCUMENT_TOKEN_TO_BE_REPLACED

Posted on August 22, 2013 by Activist Resources

The Peace and Justice Online website (www.peaceandjusticeonline.org) has reached a readership milestone.  I am very pleased to announce that the site has achieved a total of more than 20,000 page views.

I am presenting, here, below, links to each of the five most viewed posts, along with a brief summary of each post.  Each post includes a “Comments” option.  Please do not hesitate to add a comment to any of the posts.

I hope you will also check out the website’s Directory of Resources.  This Directory is an annotated listing of online resources for the peace and justice activist.  I will be doubling the number of entries in the Directory, over the next few months.  I would welcome suggestions for sites that you feel would be helpful to include.  Just drop me a note, through the Contacts page.

And now, the Top Five Posts on Peace and Justice Online. END_OF_DOCUMENT_TOKEN_TO_BE_REPLACED

Demonstration at Koch Estate in Southampton

Two hundred of us recently rallied outside the Southampton estate of David Koch, the oil billionaire who has been a prime financier of the Tea Party.  As Koch hosted a $50,000-per-seat fundraiser for Mitt Romney, we chanted, “Democracy Not Plutocracy,” “Our Democracy Is Not For Sale,” and “Overturn Citizens United.”

As my readers know, the Supreme Court decision in the case of Citizens United v. Federal Election Commission has been a major contributor to the weakening of our democracy, as it has substantially increased the ability of corporations and the wealthy to influence our elections.  This decision, along with lower-court rulings and a key tax law loophole, has allowed unlimited, anonymous contributions to foster an electoral process that is more akin to “One Dollar, One Vote,” than to “One Person, One Vote.”

The United States population now has a greater disparity in both wealth and income than we have had in decades.  (For details, click here.)  As Supreme Court Justice Louis Brandeis cautioned us, “We may have democracy, or we may have wealth concentrated in the hands of a few, but we can’t have both.”  As we work for a more equitable economy, END_OF_DOCUMENT_TOKEN_TO_BE_REPLACED

Posted on February 10, 2012 by Activist Resources

Yes.  It is time we did something about the fact that there are more than 46,000,000 people in America who are living in poverty.  If we were to seriously address this shameful situation, we could virtually eliminate poverty.

Most of my readers know the facts.  The extent of inequality in America, of both income and of wealth, is far greater than it has been in decades.  The top 1% of us earn more each year than all those in the bottom 50%, combined.  The top 1% now earns 20% of all the income that Americans earn.

Posted on October 23, 2011 by Activist Resources 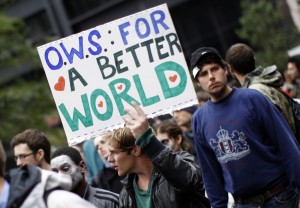 Some of my favorite signs at the occupation:

“I lost my job.  Then I found an occupation.”

“This is the first time I’ve felt hopeful in a very long time.”

Dozens of members of our Long Island peace and justice community have joined with the Occupy Wall Street demonstrators at various times, in the weeks since the occupation began on September 17.  Some have participated in the occupation several times.  Some have stayed overnight in Zuccotti Park.  One of our peace group members, a college professor, took his students to the occupation, as a field trip.  The experience that the students had, being there at the occupation and speaking with the demonstrators, was the epitome of quality, meaningful education.

It was inspiring for me to be among the hundreds of people who occupied the park, as they had transformed Zuccotti Park into Liberty Plaza, a vibrant, cooperative, democratic community.  Contrary to some media reports, I found END_OF_DOCUMENT_TOKEN_TO_BE_REPLACED

Ten Years of War in Afghanistan

Posted on September 30, 2011 by Activist Resources 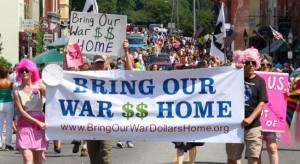 Thousands of Americans will be demonstrating in their hometowns this month, calling for an end to the war.  I believe that these demonstrations are essential, as they help to inform others in our communities of the facts behind the war, and they further a community’s commitment to taking a stand for peace.  Importantly, END_OF_DOCUMENT_TOKEN_TO_BE_REPLACED

Also, I have included, below, links to some of the websites that provide extensive information about nuclear power.

I hope you will check out the powerful video that is embedded, below.  It does an excellent job of summarizing the most serious problems with nuclear power, through excerpts of testimony by some of the nation’s most respected anti-nuclear experts, including Helen Caldicott, Michael Mariotte, and Harvey Wasserman.

Also, you might want to check out the second video, with Jackson Browne, Bonnie Raitt, Keb’ Mo’, Graham Nash, and Ben Harper.  They do a very nice job, singing and speaking about several aspects of the nuclear power issue.

1)         Nuclear power plants release radiation into the atmosphere and into our waters.  If radiation could be seen or smelled, we would be more aware of this poisonous pollution, and we would be far more likely to ban nuclear power.

2)         Nuclear power is so dangerous, and is such a risky investment, that private investors will not provide the backing for it.  The only nukes that are currently being built, anywhere, are those END_OF_DOCUMENT_TOKEN_TO_BE_REPLACED